What Are the Differences Between Primal, Paleo, and Traditional Diets?

What Are the Differences Between Primal, Paleo, and Traditional Diets?

A Comparison of Primal, Paleo and Traditional Foods

The world of consumer health and nutrition is filled with diets of every kind.  Over the past several years, three of those diets have become quite popular.  The Primal Blueprint

and the Traditional Foods

diet.  You, or someone you know, have probably tried one or two of these popular diets. Maybe you’ve tried a variation of one of these diets such as the Ketogenic Diet

Each of these diets has some components in common with the other diets.  Many people wonder, “What is the difference between Primal and Paleo?”  How does Primal or Paleo compare to Traditional Foods?  What is allowed on the Primal diet?  What is allowed on the Paleo Diet?  I have compiled a handy chart that compares and contrasts each of the three main diets in their purest form. 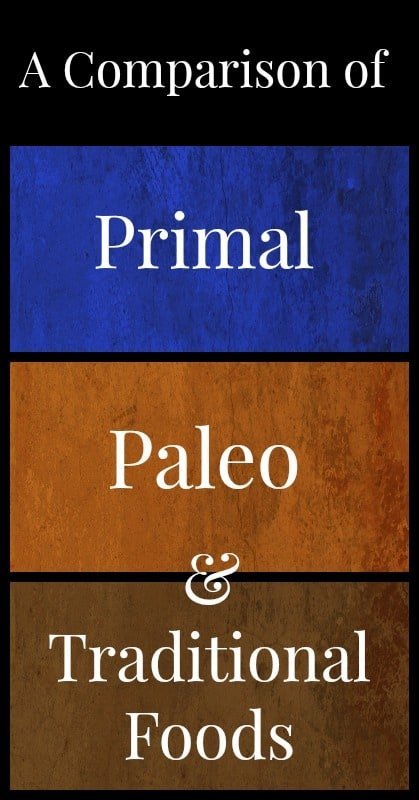 NOTE: This chart was created from the original versions of each of these diets. The diets have changed a little over time as science and personal preferences dictate.

Before going any further, I want to make it clear that each of these so-called diets is actually a life-long way of eating and not a weight-loss diet.  While it’s true that a person eating a Primal, Paleo or Traditional Foods diet may lose weight, the main reason that many people chose these ways of eating is to increase health, not decrease weight. These diets require a commitment to changing the way you eat for the rest of your life.

All of the information I used to make this chart was obtained from the following books and websites:

This chart is a quick guide to be used for comparison only.  Do not use this chart to decide if any of these diets are right for you without first reading the books.  There is an incredible amount of information in each book that you will need to know before making a truly informed decision about which diet is right for you.  This chart simply addresses the differences between the Primal diet, the Paleo diet and the Traditional Foods diet.

Because this information is taken directly from the books listed above, there may be other acceptable foods for each diet that are not listed here because were not acceptable foods for the diet at the time of publishing.  As science forges ahead and we learn more about various foods and drinks, they may be found acceptable as part of one or more of these ways of eating.