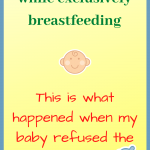 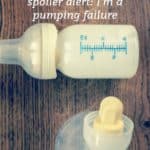 My Experience with Breastfeeding While Working

I had a difficult experience with breastfeeding while working. When my oldest son was six weeks old I returned to work part-time.  I felt a little panicked because he hadn’t learned to properly latch onto a bottle.  In fact, it took us several weeks just to get our past breastfeeding latch issues. I didn’t have much time to teach him to use a bottle.

When I supplemented with formula or fed him pumped breast milk, he never ate more than an ounce or so at a time.  How was he supposed to get enough to eat while I was at work for four hours? I felt worried and stressed about my return to work.

No time to read my story right now? Go ahead and pin it for later!
Pin This Article for Later

Making a Plan for Breastfeeding While Working

My plan for breastfeeding while working included pumping once at work and again in the evening at home. I hoped to provide at least two 4 ounce bottles for my son each day. He nursed quite a bit at night at this point. I figured if eight ounces of breastmilk wasn’t enough for four hours, he’d make up the difference by nursing at night.

I Was a Breast Pumping Failure

As it turned out I could never pump more than two ounces at a time. I hated pumping and considered giving my son formula during the workday. His daycare provider understood that my commitment to breastfeeding. She assured me he wasn’t starving on my meager supply of pumped milk.

In fact, he slept for half of the time he was at daycare. He attempted to eat once a day at first. Otherwise, he sat happily in the swing and observed the older babies.

At first, he didn’t cry or seem hungry.  He did, however, spend the afternoons and evenings attached to my breast, leaving me very little milk (or time) for pumping.

Around eight weeks, my son began to “wake up” at daycare. He stopped spending as much time sleeping.  He cried more and still wouldn’t latch onto the bottle properly.  Some mornings he refused the bottle completely. Of course, this worried his daycare provider. One day, in desperation, she called me around ten in the morning to come nurse him.

By his ninth week, he refused the bottle every time it was offered. If I wanted to continue breastfeeding while working I needed a new plan.

My supervisor and co-workers noticed, though no one said anything negative.  I think they assumed I’d be pumping during that time anyway. I took home any work I could during that week. However, I knew I couldn’t sustain breastfeeding while working like this. Over the weekend I devised a plan.

A New Plan for Breastfeeding While Working – But Will My Boss Agree?

My predicament was obvious – It didn’t matter how much or how little I pumped or if I formula fed. My baby refused to eat from a bottle. I didn’t know at the time that this is a common issue for babies around this age whether they are breastfed or formula fed. As a first time mom I didn’t have the experience to know we could probably work through it. (Also, this was 2001 and we didn’t have as many bottle/nipple options then as we do now.)

Honestly? I’m glad I didn’t know because I didn’t have the stamina to continue to try bottle feeding. Anyway, what happened next was a dream come true.

Even though my supervisor and co-workers were understanding and patient, I’d already cut my hours to part-time. Now I was spending an hour of my four-hour work day away from work – feeding my baby.  I knew I could lose my job if this continued!

Still, I needed to be able to work and feed my baby at the same time.  I considered the possibilities and came up with two scenarios I could live with.  I could hire a nanny to care for my son and bring him to me when he needed to eat. Or I could work from home.  Since hiring a nanny would reduce my hourly pay to a couple of dollars an hour, working from home made the most sense.  Easy choice, right?

There was only one problem.  No one in our company worked from home.  Why on earth would they let me telecommute?

Gathering the Courage to Ask My Boss to Work From Home

I felt certain I would have to give up my job. With my husband fresh out of college and a new baby in the home, that would likely mean going on public assistance.

I felt nervous to talk to my supervisor about working from home. However, I knew this was my one shot at having the best of both worlds – motherhood and financial security.

As it turned out, my supervisor was extremely understanding and supportive. He promised to talk with the corporate office about me telecommuting. When he did, they agreed! (Check out my article How To Ask Your Boss to Work From Home.)

By the end of the week I was set up for full-time telecommuting.  Yes – full time. In a compromise for the privilege of working from home, I agreed to take on an important task that I performed before my maternity leave. The person who had taken it over was struggling with the job and looking for another position within the company.

I gladly added more work to my plate in exchange for the privilege of breastfeeding my baby on demand.  I never regretted that decision.

Does Breastfeeding Get Easier?

But there I was, 12 weeks into my breastfeeding experience,  sitting at my desk at home, spreadsheet open, fully concentrating on work when I looked down at my nursling.  I suddenly realized that all of our breastfeeding struggles were gone.  He was latching easily and staying latched!

I fed him on demand, which was about every two hours for 20 minutes.  He was healthy and growing. Our nursing relationship felt peaceful and easy.

This was the promised land of nursing I’d read about, the one other moms assured me I’d reach if I just kept going.

But my breastfeeding story doesn’t end here. Read the next part to find out how I treated mastitis naturally.