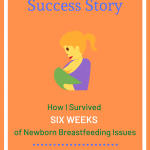 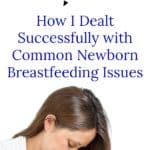 I had a rough start to breastfeeding my oldest child. We dealt with several common newborn breastfeeding issues such as poor latch, thrush, overactive letdown, and reflux.  Actually, only hindsight brought to light the last two issues. I just knew that breastfeeding felt difficult and painful. I often wondered if it was worth it. (Spoiler alert: It was worth it.)

Even though we had a difficult start to breastfeeding and despite my daily declarations that I didn’t want to breastfeed anymore, we held on and eventually developed a successful nursing relationship. I hope my story encourages moms who are struggling with common newborn breastfeeding issues.

No time to read the whole article now? Pin it for later!
Pin This Article for Later

My oldest son was born after 46.5 hours of labor.  Back labor.  When his little sunny-side-up face finally appeared in the world, I was both exhausted and relieved.  His APGARs were great and they handed him to me all bundled up, nothing visible but his squishy face.

The nurses asked me if he would be breastfed or bottle fed and recorded my response. Because we had a guest in the room and I was shy about nursing in front of male friends and family, I didn’t attempt to feed him immediately.

Other than staring at him, I really didn’t know what to do with him.  He was calm and quiet – much like he had been in utero. Looking back I know I missed the first crucial moments after his birth for skin to skin contact and initiating the breastfeeding relationship. (In 2001 my small town hospital still educated moms more about formula than about breastfeeding.)

When our visitors and all of the nurses finally left us alone I made my first attempt to feed my son.  It didn’t go well.

He latched and immediately fell off. Over the next two days in the hospital, he never latched for more than a couple of seconds.

Our breastfeeding relationship was complicated by the fact that I couldn’t sit up. My tailbone had broken during labor and the pain increased each day. Learning to properly hold my baby, much less nurse him correctly, felt impossible.

The lactation consultant showed me various holds, but without the ability to sit up to nurse, the lessons seemed useless.  I wish I had learned to nurse lying down much sooner.  I didn’t even consider trying that until our first night at home where I finally felt comfortable while nursing my baby.

The next couple of weeks became more difficult for me.   My baby’s latch continued to be terrible and within days my nipples were raw, bleeding, and burning.  (Lanolin

was a lifesaver!) By the end of his first week of life, I decided to make the formula samples given to me by the hospital because I feared my baby wasn’t getting enough to eat.

I cried in pain when I breastfed. I told my husband many times that I didn’t think breastfeeding would work.  I knew it was the best way to feed my baby, but I had second thoughts about continuing the torture.

The Best Way to Get Through Newborn Breastfeeding is to Relax

In a desperate attempt to save our breastfeeding relationship in the first few days, I checked out several breastfeeding books from the library. I read The Womanly Art of Breastfeeding first and it was eye-opening.

The best information I received encouraged me to relax. I knew I couldn’t force a good breastfeeding experience, so I calmed down about the outcome. We’d either succeed at breastfeeding or we wouldn’t. I felt at peace with either result.

Connecting with Other Moms is Vital for a New Breastfeeding Mother

In the first few weeks of my son’s life, I found several breastfeeding message boards online. These communities provided support that helped change my breastfeeding experience for the better.  Within those message boards, I discovered a parenting practice called Attachment Parenting. Once I embraced AP my views toward my baby and myself changed in a positive way.

The experiences shared by the other moms helped me to realize that many moms go through the same newborn breastfeeding issues. Their support made a world of difference in my breastfeeding experience.

Even with my online support groups the first six weeks of breastfeeding were extremely difficult.  I felt desperate to stop the pain. However, I wanted to give my son as much breast milk as possible. I began to consider exclusively pumping.

That option never panned out because when I attempted to pump, I expressed so little milk that I knew I couldn’t pump exclusively without also using formula. (I wrote more about how I struggled to pump breast milk.)

The more I read about formula the more determined I became avoiding using it.  In addition, my baby’s bottle latch was even worse than his breast latch!

Breastfeeding a Newborn with Thrush

At my son’s two-week check up, the pediatrician noticed my son had thrush, which partially explained my battered nipples. The doctor prescribed something for the thrush and told me it might help with our breastfeeding difficulties. For the first time I felt hopeful that we would succeed with breastfeeding.

Because my son still had trouble latching properly, I was very concerned that he wasn’t gaining weight.  When he’d take a bottle (which wasn’t very often) I supplemented with formula, both grateful for its existence and sad that I needed it at all.  To my surprise, his weight was right on target!

Eventually, the thrush cleared and I learned to nurse while lying on my side. My baby begin to stay latched for a little longer.  In the meantime, I continued to supplement with formula samples and pumped breast milk when I could.

(Side note: Two years later, when my second baby was diagnosed with reflux, I realized my older son had undiagnosed reflux when he was a newborn. Thrush, along with reflux (and my overactive letdown) explained his latch issues. I wish I had known enough at his well baby checks to tell his pediatrician about other symptoms like back-arching and spitting up. I thought these things – especially the spitting up – were normal. But, as a first time mama and I didn’t know what I didn’t know.)

Once the pain of nursing began to subside, I became relentless in helping my baby to latch and relatch during nursing sessions.  He’d latch and fall off over and over.  Over and over, I’d relatch him and lay very, very still until one day I realized we’d been nursing for five full minutes with no unlatching. This time I cried tears of joy instead of tears of pain and desperation.

By the time my son was six weeks old, I no longer relied on formula supplementation at all. Even the thought of pumping exclusively was long gone.  My son breastfed for forty minutes at a time, every 1.5 hours. Like A Champ!

I vaguely remembered a mom in my online breastfeeding support group telling me that most newborn breastfeeding issues disappear in 6-8 weeks. When I’d only been breastfeeding for two torturous weeks this seemed like an impossibly long time. It was definitely long enough to make me consider giving up on breastfeeding.

As I gazed at my baby’s milk drunk face I said a prayer of gratitude that I was able to have this beautiful experience and that it was getting easier day by day.  Who knew that something so natural, so essential would be so excruciatingly difficult?  I felt glad that those difficult first weeks of breastfeeding were behind us.

And – spoiler alert – my oldest son went on to breastfeed until he was four.

Breastfeeding a Newborn Was Hard, But It Was Worth It

If you’re reading this and you’re having trouble breastfeeding your newborn I can’t tell you what’s right for you.

I can tell you that I’m forever grateful I stuck it out with my oldest son even through the unbearably painful first weeks. I can tell you that I found a strength I believe comes only from a mother’s love and it carried me through. Now I know I can do hard things. The confidence I gained was worth the price I paid for it.

No, I can’t you what’s right for you and your baby, but I can tell you I’ve struggled, I’ve made it through, and I’d do it all over again.