What Is Contempt In Marriage? Plus Four Ways to Fix It.

What Is Contempt In Marriage? Plus Four Ways to Fix It. 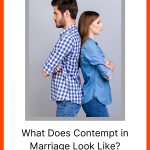 I remember when I first learned about the red flag of contempt in marriage. One of my grad school professors required us to read Dr. John Gottman’s book The Seven Principles of Making Marriage Work

. It was through Dr. Gottman’s work that I learned about how dangerous contempt (along with criticism, defensiveness, and stonewalling) is to the health of a marriage.

It took me some time to understand what contempt in marriage looks like. After more research and seeing it at play in the marriages of a few of my former therapy clients I had a better picture of how contempt plays out in a marriage and how to fix it.

This a long article. If you don’t have time to read the whole article now you can easily pin it for later by clicking the Pin button below.
Pin This Article for Later

Before we talk about contempt in marriage, let’s define contempt. Simply put, contempt is an emotional mix of anger and disgust.  Contempt produces the feeling that something or someone is undeserving of consideration or deserving of scorn.

Contempt damages all relationships. Marriage is no exception.  When marriage partners journey down the road to contempt they put their marriage at risk.

What Does Contempt Do To a Marriage?

If you’ve ever been on the receiving end of your partner’s contempt, then you know how it makes you feel.  When someone you love and are emotionally intimate with treats you with disgust or flings sarcasm your way, it hurts. Even if your spouse apologizes later, the fact that he expressed such hurtful things about you still plays in your mind.

When your partner scrutinizes your life and exposes your flaws, you begin to trust him – and his love for you – a little less.  Eventually, your marriage becomes a place where you don’t feel safe to be yourself because you think your partner looks down on you. This lack of trust and security dooms a marriage.

How Can You Stop Contempt From Ruining Your Marriage?

The best way to keep contempt from ruining your marriage is to never let it get started.  This means that couples must find a way to express their frustrations and voice their complaints without sliding into resentment or disgust.

Four Ways to Keep Contempt Out of Your Marriage

Make Your Complaints All About You

This means using your “I” statements. For example, when your partner does something you don’t like, tell him how it makes you feel.  Use statements like “I feel frustrated when . . . “, and “My feelings are hurt when . . .” instead of “You frustrate me when . . .” and “You always hurt my feelings.”

Your feelings are yours to feel and identify – not your partner’s!  (Read my articles My Husband Doesn’t Make Me Happy and My Husband Isn’t My Best Friend.) However, as your committed spouse, your partner should care enough to discuss with you how you feel and what steps you can each take so you don’t feel that way anymore.

I talk more about this important practice in my article How to Have a Happy Marriage.  When your partner does something that annoys or hurts you, don’t automatically assume that he intentionally tried to annoy or hurt you.

Talk to your spouse about it and explain how you feel, but don’t blame him for being purposefully hurtful.  The truth is he may not have been thinking of you at all!  Help your spouse become more aware of how his actions affect others by saying how those actions affected you.

Know the Difference Between Complaints and Criticism

When you complain to your partner about something he’s doing that bothers you you aren’t attacking him as a person.  (Especially if you use your “I” statements and assign positive intent.)

Complaining helps you express yourself and be heard.  Criticism, on the other hand, is damaging and can prompt feelings of contempt.

Pay Attention To Your Own Faults and Practice Compassion

When you feel like criticizing your partner try to remember the last time you were perfect. If your partner struggles in ways that you don’t, think about how you’d feel if he began criticising you for the things you struggle with.

Instead of looking down on your partner or feeling disgust toward him, ask how you can help.  Your spouse probably already knows the things that he has difficulty with and would probably be relieved if you showed compassion instead of condemning.  Be your partner’s biggest fan and the first one in line to help him when he needs it!

You Deserve to Live in a Contempt-Free Marriage

Maybe you’re not the one in your marriage with feelings of contempt. Remember, if your spouse shows signs of contempt toward you you don’t have to live with it. Seek individual counseling to develop your self-esteem and to learn how to set boundaries. Ask your counselor if marriage therapy could help your situation.

If you want to know more about contempt in marriage and other factors that destroy marriage and predict divorce, read The Seven Principles for Making Marriage Work by John Gottman.  This was required reading in my grad school Marriage and Family Therapy program and remains one of the best books I’ve ever read on the subject of marriage.