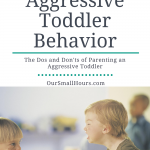 When you’re parenting a toddler it’s only a matter of time before you have to manage unpleasant toddler behaviors like hitting, kicking, biting, and throwing. Learning how to deal with aggressive toddler behavior puts every mom to the test. None of us expects it from our little angels until the first time it happens.

It usually catches us off guard and unprepared.

The good news here is also the bad news: Almost all toddlers go through an aggressive stage as they learn to manage their big emotions and use their words. That means your little one is completely normal, which is both reassuring and frustrating at the same time.

Don’t worry though. Since I’ve been through this stage with three kiddos myself I know what works – and what doesn’t.

I’m happy to share my experience and insight with you as your toddler moves through this difficult stage.

Quick question - How many times will you be interrupted before you can finish reading this page?

Go ahead and pin this one for later so you can get back to it easily when you've got a second.

Pin This Page for Later

The Dos and Don’ts of Dealing with Aggressive Toddler Behavior

When it comes to handling aggressive toddler behavior there are a couple of important *Don’ts* to remove from your discipline toolbox.

Fortunately, there are plenty of *Dos* to rely on to move your toddler through this frustrating stage of development.

We’re going to talk about the *Don’ts* first and then move right into the things you CAN do to help your toddler extinguish their aggressive behaviors.

Look, I know the knee-jerk reaction might be to dole out punishment. Toddlers need to learn that aggressive behavior is NOT okay, right?

Yes, they DO need to learn that aggressive behavior is wrong and hurtful, but punishment isn’t really a good teacher.

Punishment just isn’t effective for this (and most other) stages of development.

You can read more about why I don’t punish my children and check out alternatives to spanking if you haven’t removed it from your discipline toolbox yet.

Let’s keep it real – if you expect your child to change their behavior after being corrected once (or twice or even five times) you’re asking to be disappointed. Behavior changes often happen slowly over time.

Be honest – how long does it take you to extinguish a negative behavior yourself?

You Might Also Enjoy:  Thanksgiving Turkey Crafts for Preschoolers

I’m certain there was a behavior change process you went through before fully stopping the behavior forever, right?

First you had to understand the consequences of the behavior – both for yourself and for others – and then you had to make a plan to stop the behavior.

If you successfully ceased the unwanted behavior it’s likely because you replaced it with a different behavior that felt acceptable and positive.

Your preschooler may need even more time to replace aggressive behaviors with acceptable ones. Be patient with them and don’t expect the changes to be immediate.

Now, let’s talk about what you can DO to deal with aggressive toddler behaviors.

It’s really easy to wonder if your aggressive preschooler is destined for a life of crime. Why else would they react with hitting, kicking, throwing, or biting when they’re upset?

As it turns out, aggressive behavior is simply an age-appropriate stage that many preschoolers go through as they learn about boundaries and feelings.

Each of my boys went through a stage where they lashed out physically when they felt angry. None of them has any trouble with anger management as teens. In fact, by the time they were three they had developed better ways to communicate their feelings.

Now, that’s not to say that aggressive behavior in preschoolers is socially appropriate. It’s not. That’s why you’ll spend time now correcting that behavior.

Just because a behavior is age-appropriate doesn’t make it socially appropriate. So, don’t ignore the behavior just because nearly every little one does it at some point.

It’s likely you practice gentle parenting and wouldn’t dream of smacking your child when you’re upset with them. But, if you’re still hitting your child, please see the alternatives to spanking article I linked above.

The adults in your household should do their best to model calm reactions to upsetting situations. Over time your child will adopt your measured response to strong feelings and frustrating situations.

Since none of us is perfect, when you do model inappropriate behavior be sure to self-correct and apologize to your child.

We all make mistakes, which gives us the opportunity to show our children how to take responsibility for our decisions.

Conversations with your toddler about how to handle feelings that trigger aggression should happen when things are calm.

It’s important to be proactive when teaching your child how to respond properly to frustrating situations.

My favorite way to teach appropriate behavior to little ones is by reading books to them .

Here are some great books on handling feelings of frustration and aggression that you can work into your daily reading time with your preschooler. (The first two I used with all my now-teenaged boys when they were toddlers.)

Tell Your Toddler How Their Aggressive Behavior Feels

The development of empathy is critical to a child’s social and emotional growth. When your toddler hits you tell them how it feels.

In fact, responding with “Ouch! That hurts!” might be more effective than simply telling your child no.

They need to understand that their actions have consequences for people other than themselves. They need to learn that they CAN hurt others with their behaviors.

Truthfully, toddlers won’t understand that their attempt to relieve feelings of frustration can cause pain to others. That’s why we can’t simply ignore aggressive toddler behavior.

Keep in mind that the goal here is not to scare your child with an overly dramatic reaction, but to be honest about what you (or the dog or their sibling) feel when you’re hit, bitten, kicked, etc.

Decide on a Consequence Beforehand and Stick With it

Consequences for aggressive toddler behavior will depend on the specific behavior and how the adults in your household agree to handle it. (If the adults can’t agree, check out my article “My Husband and I Disagree on Parenting“.)

Before we talk about appropriate consequences for aggressive toddler behavior, let’s go over the things that shouldn’t be on your list of consequences.

Here are some ideas for what you CAN use as consequences for toddler hitting, biting, kicking, etc.

Give Your Toddler’s Feelings a Name

It’s difficult for humans to have empathy for what others feel if they don’t understand what they themselves feel.

Toddlers don’t yet understand their feelings or how to explain those feelings. It’s your job to give them the words they need to describe how they feel.

When toddlers know what they’re feeling and why, they can ask for the help they need instead of lashing out with aggressive behavior.

When your toddler is frustrated and begins to tantrum, tell them, “You feel frustrated because . . .” If they’re sad, name that feeling. Explain that when _____ happens, sometimes we feel _____.

Let them know that their feelings are okay. Be there to reflect those feelings and help them move past them.

Sometimes that means holding them while they cry.

Sometimes it means distracting them to focus on something fun or positive.

You’ll know in the situation which approach is best. Trust your mama instincts.

When you teach a two year old the names for their feelings you end up with a four year old who doesn’t need to tantrum or behave with aggression to get relief from their feelings.

Create a Calm Down Space

When your toddler has had enough and teeters on the edge of undesirable behavior, have a place they can go (with or without you – it’s up to them) to calm down and restore balance.

Have this space stocked with a soft blanket, a pillow, a few plush animals to snuggle, books, or other calming items.

This space is to be used NOT as a time out or a punishment, but instead a place of comfort where a child can go to reset.

Here are some items to consider for your child’s calm down space.

Give Your Toddler a Chance for Apologies and Amends

If your toddler hurts someone while behaving aggressively it’s okay to teach them to apologize.

Don’t force the apology. In fact, you may have to say the apology for them. By doing so you’re modeling appropriate behavior.

As your child gets older and becomes able, you’ll introduce the concept of making amends where possible.

It’s not always possible to make amends, but it’s important to try.

Give Your Child Opportunities to Move Their Large Muscle Groups

Activity is so important to proper growth and development.

Your toddler’s aggression may sometimes stem from pent up energy that causes their body to feel bad.

Make sure your child has plenty of opportunities each day for large muscle group movement.

This may look like rebounding, jumping, running, climbing, or other activities that keep their muscles engaged and their body in motion.

Provide your child with appropriate toys for kicking, hitting, punching, etc so they can learn about how their body works and understand the physics of everyday life.

Here are several books for you to read to learn more about aggressive toddler behavior and how to handle it.