Are you done having babies?  Do you know for sure or is this a question that’s difficult to answer? For me it wasn’t easy to answer until recently.  (I’ll tell you my answer in a bit.)

For many moms, the answer is simple.  There are several ways for moms to be sure that they don’t want more kids.  Those signs are obvious.

Easy Ways to Tell if You’re Done Having Kids

But, if you were sure that you were done having babies, you wouldn’t have googled that question and you wouldn’t be interested in reading this article.  It’s those of you mamas who aren’t so sure that have found yourselves here, looking for an answer to this difficult question.

So read on, while I give you my unique answer to this question.

How I Know I’m Done Having Babies

When I first considered marriage and children, I was pretty specific about my desires. I wanted to be married by 20 and have my first child at age 22.  I wanted four children, two years apart and to be done with conception by 30.

I know.  I was super-adorbs with all of my little-girl dreaming.  In fact, when my ex-fiance and I broke up not long after my 20th birthday, it took me nearly a year to admit that I was more heartbroken over losing my married-by-20 dream than I was over losing him.  No wonder we didn’t work out, right?

When I married my husband at 22 and became pregnant only five weeks into our marriage, I was back on track.  Of course, by that time I realized that things don’t always go as planned and that I had more than just my ideals to consider when it came to family planning.

After my third child was born when I was 27, I knew that I wouldn’t be having another baby in two years like I’d done after my first two children were born.  While I knew I still wanted a fourth, I had been a little overwhelmed when going from one child to two and wanted to see how I adjusted to having three before deciding when to conceive number four.

And then I was 30.  Thirty sneaked up on me like a ninja.  I had been so busy for the past 7 years being pregnant, nursing and dealing with toddlers that I never even saw it coming.  My youngest was almost 3 and had gone from being a blissfully happy, easy baby to a tearful, tantruming toddler.  I knew for certain I was not ready to deal with the bone-deep fatigue of pregnancy while homeschooling my older two and dealing with my youngest son’s less-than-sunny disposition each day. In addition, I had just started grad school.

And then, the baby turned 4.  I had just begun to entertain the idea of another child or two when my husband came home early from work one day.  He’d just been informed that it was his last day.

He quickly rebounded and took a new job that required 3rd shift work, seven days per week. The economy was a mess and our savings were dwindling. This was no time to consider adding to our family.  We barely saw him and I was struggling to keep up with homeschooling, grad school and working part-time as a family therapist.

Then, the baby was 7. And I realized that family therapy wasn’t my calling and that Our Small Hours was.  I left therapy behind and focused on building my website.  It became what I affectionately called my fourth child.

And about four years ago I decided to work part-time in order to have money to put back into the creation of Our Small Hours without taking money from our budget.  My part-time work quickly became full-time as the company I worked for grew.  I knew I didn’t want to be pregnant or have a baby while working full-time.  I also knew I would eventually stop working, once I got my department to a place where I felt comfortable handing it off to someone else and once Our Small Hours had become more established.  I decided that I’d bring up having baby number four when I finally left my job.

And now, just a few months before I quit my job, at the age of 37, with my youngest having just turned 10 . . . I’m not sure if I’m done having babies or if I really want more children.

Most of the time I have a plan in place and don’t struggle to make decisions.  I either want something or I don’t.  That held true for each of my previous pregnancies.  But, this time the decision making process has been different.

This time I realize that I’ve been making a decision all along.  I’ve been deciding that conditions were either right or not right for having another baby.  I’ve been taking it one month at a time.  And that’s my answer.

My husband and I practice natural family planning and do not use any form of contraception to prevent pregnancy.  We won’t ever do anything permanent to prevent pregnancy but would not be devastated if I became pregnant.  And that’s as close as we’ve gotten in the past ten years to making a decision about having more children.

And speaking of time, I know that time is not on my side.  While I still have just enough time to double my family if I wanted, one day I will not be able to become pregnant.  There’s a chance that if I tried to become pregnant now, we’d deal with fertility struggles.

So, for now, I continue to make the decision to not have more children on a month-to-month basis. There’s absolutely no pressure that way.

My advice to any mama who cannot decide if she’s done having babies is to, quite literally, take it one day at a time.  Weigh the pros and cons, but trust that if you’re meant to have more children you will.  And if you’re not, you won’t.

In the first scenario, I can see the difficult work involved in the years between ages 2-7 that always makes me swear I’ll never have more children.  In the second scenario, I can see the light at the end of the tunnel that allows me more time to pursue my creative interests and extra resources (time, money, energy) I’ll have for my boys as they move through their teen and early adult years.  At least for today, this keeps the balanced tipped toward being done having babies.

But, at some point, I can’t promise that I won’t want a chance at the magic of creating another beautiful human with my husband and introducing a precious soul to life here on earth.

Today, I’m okay with not being sure because I know I’m making the best decisions for my family each day and thoroughly enjoying my life as it is in this moment. 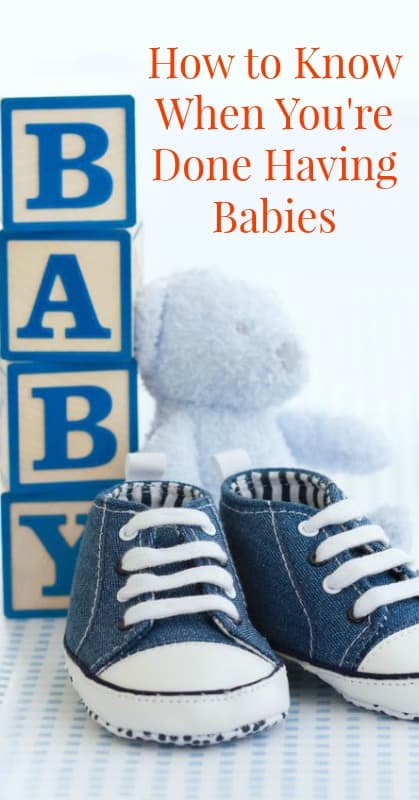