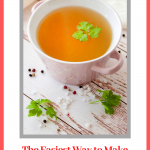 But first, go ahead and pin these tips for later. You’ll need them when you’re ready to make your first batch of slow cooker bone broth.

Just click the pin button below to save this for later.
Pin These Tips for Later

The Benefits of Bone Broth

Maybe you’re new to a healthy, real food diet and you don’t know about the benefits of bone broth. Bone broth is delicious, comforting and incredibly nutritious.

Now, I’m not talking about that tetra pak of salty liquid or those msg cubes you can find at your local grocery store. That’s not bone broth and it’s not good for you.  I’m talking about the amazing, flavorful liquid that’s made from slowly cooking bones and scraps of meat in water.

Broth can heal the gut.  Broth can help joints to regenerate.  Broth can keep your skin from wrinkling prematurely. It’s a perfectly gentle, nutritious food/drink.

I keep containers of bone broth in my freezer to pull out when I make my favorite homemade soups.

Check out my homemade soup recipes that call for bone broth.

Making Bone Broth on the Stove Top is Easy But . . .

To make bone broth on the stove top you simply fill a stock pot with water and add the bones and other leftovers of a whole chicken. Put it on the stove and let it do its thing at a very low temp for a day or two.

Good broth takes time.  It’s the ultimate slow food.  But, oh is it worth it!

Really!  It’s that easy.  But, if you’re like me and you don’t fancy the idea of leaving your stove on overnight or while you’re away from home there’s an even easier way to make delicious, nutritious bone broth.

I started using the slow cooker to make bone broth several years ago.  At first, it didn’t seem to be of the same quality as the bone broth made on the stove in a stock pot.  It didn’t gel as well and the second batch always had a funny, slightly-off flavor.

Simmer Slow Cooker Bone Broth on Warm Instead of Low

I soon realized that the slow cooker, even set to low, was simply too hot for making bone broth.  When the bones are cooked at a too high temperature, the collagen breaks down and the broth doesn’t gel as well.  I’m not sure that’s the end of the world, but I like my broth to gel regardless.

In addition, after the second or third round of broth making from the same carcass, the broth was getting a burned flavor. Yuck!

I’ve found the trick is to set the slow cooker to warm.  Believe it or not, the warm temp is high enough to properly make bone broth.

3.  Turn the slow cooker to warm, replace the lid and simmer for at least 24 hours. (Mine often goes 30 hours.)

4.  Remove the chicken by scooping it into a strainer

placed over a large bowl or pot.  The broth will be captured in the bowl or pot below the strainer.

5. Return the chicken in the strainer to the slow cooker, add 3-4 quarts of water and repeat the entire process once or twice again.  (I usually make 2-3 batches of bone broth from one whole chicken carcass.)

6. Let the broth cool. Then pour it into containers to refrigerate or freeze – OR add salt or seasonings and drink right away.

For the last two batches, I sometimes add grass-fed gelatin to make them as gel-like as the first batch.

right away. Those are my favorite flavors in bone broth for drinking.

If I’m making the bone broth to freeze I skip the salt and seasonings. I don’t want to risk over-salting the final recipe. Also, I might not want a herbal flavor, for example, in some recipes so I keep the broth bland until I know which recipe I need it for.

By the way, if are you worried about lead in slow cookers, check this out.

This is how I get a real food dinner on the table on even the busiest evenings. It’s all about planning, baby. Check it out! 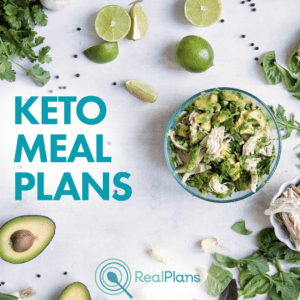