While I still I believe in the tenants of attachment parenting, I also believe it doesn’t have to be as difficult as we sometimes make it. 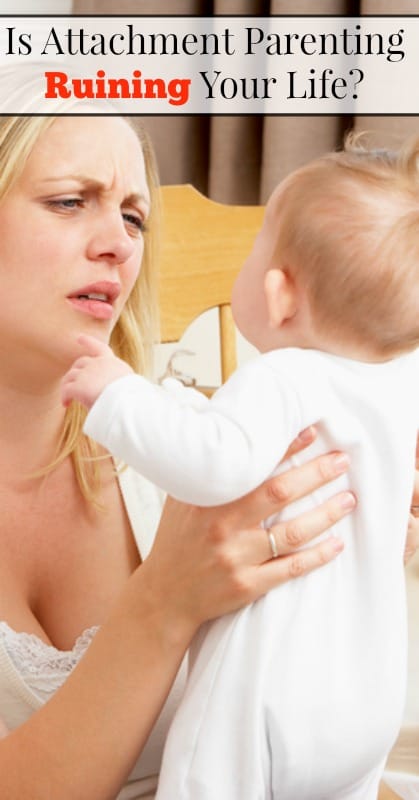 Are You a Rule Follower?

Are you attempting to practice attachment parenting 100% by the book? If you are this could be making your life (and your child’s life) harder than it has to be.

When my oldest was a baby, he slept better when he was in his own crib than when he co-slept.  I knew I was supposed to co-sleep with my baby.  That’s what the rules of attachment parenting said.  Babies were made to sleep close to their mothers.  It was a deeply rooted biological function created for their own protection.

Still, my baby was restless and awakened often when sleeping next to me.  By the time he was six months old my son was sleeping alone in his crib and waking once per night to nurse.  I’d usually bring him to bed with me when he woke up and then be kicked and pushed for the rest of the night if I didn’t return him to his crib.

Now, many attachment parenting mothers would say that co-sleeping makes life so much easier because you never have to get out of bed in the middle of the night. In fact, your child can roll over and nurse at any time and you don’t even have to wake up!  I agree that was the case for two of my children, but for my oldest co-sleeping meant less sleep for both of us.

If I had insisted on co-sleeping with my son when it wasn’t working for us, we would’ve both been miserable and I might’ve blamed attachment parenting for “ruining my life”. Instead, I broke the rules and co-slept with my oldest only when it worked for us.

Get your life back by doing what is mutually acceptable for you and your child.  Stop following the rules and start following your intuition and your child’s needs!  After all, that’s what attachment parenting is all about:  listening to what your child needs and being intentional in your parenting.

Attachment parenting does not mean following a list of rules just because they’ve worked for someone else.

Are you Worried About What Others Think?

I was afraid to admit to certain fellow attachment parenting moms that I:

I didn’t want to be judged by the mothers who seemed to have it all together.

The truth is so many of us would love it if just one of us would start an honest conversation about how we parent when no one else is looking.

There is not one attachment parenting mama who’s always done things exactly by the book.  Lose the guilt, be who you are and don’t apologize for taking shortcuts when they improve your quality of life.

Are You Parenting Under the Influence of Fear?

When I was a new parent, I was anxious about getting everything just right.  I wanted my son to have the best life possible and I knew the decisions I made while he was in my care would have an impact on him far into the future.

After some time (and two more kids) I realized that at least a few of the decisions that I was making were being made under the influence of fear.

For instance, after my second child was born my oldest, who was still nursing, would ask to nurse every time the baby did.  At first it was okay, but when he also wanted to nurse between the baby’s nursing sessions, it grew to be too much.

My fear of saying no to him was causing him to become more demanding and me to be miserable.  I was worried that denying some of his requests to nurse would cause long term resentment from him.  I worried that it would cause sibling rivalry and that his need for comfort wouldn’t be met.

With the help of a kind group of fellow attachment parenting moms, I finally realized I was doing both my son and myself more harm than good by parenting out of fear.  I was able to set limits on his nursing and show him other ways to get the comfort and quality time with me that he desired.

Make the adjustments necessary to make life mutually enjoyable for yourself and your child.

For more information read my article about how to deal with parenting anxiety.

Are You a Permissive Parent?

If you’ree overwhelmed by the gentle discipline aspect of attachment parenting then you might not be setting enough limits with your child.

Fortunately, we were able to recover from a couple of years of sometimes-permissive parenting.  However, in that time I learned just how chaotic life is when children are parented permissively.

If you’re practicing permissive parenting and not setting appropriate boundaries for your children, you are making your life and their lives harder than necessary.

Remember, attachment parenting and permissive parenting are not the same thing.

Are You Taking Time For Yourself?

Over the years I’ve found that many attachment parenting moms, myself included, aren’t taking enough time for themselves.  I understand it can be difficult to carve out time for yourself.  However, it’s important to prevent burnout and find balance as a mother.

Please take time for yourself before you feel burned out.  This may mean handing the baby over to your partner or a trusted caregiver while you take a hot bath.  It may mean grocery shopping alone.  It might mean napping when your children nap each and every day.  It could even mean going to work outside of the home!

Whatever you need to do to refresh yourself should be done.  You’re not doing yourself or your family any favors by being a martyr mommy.  Don’t fall into the trap.  Martyr moms aren’t better moms, they’re just more miserable moms.

Attachment Parenting is Not Easier

I know one of the biggest arguments for attachment parenting is that it’s easier than conventional parenting.  I disagree.  I think mainstream parenting practices are far easier than ‘natural’ ones.

This is especially true for those of us who were raised using conventional parenting methods. Natural and attachment parenting was never modeled for many of us and we are learning as we go.  This can be physically and emotionally exhausting!

Humans are great at finding shortcuts, easier ways of doing things, new technologies, and ways of making life more comfortable. That’s what conventional parenting has done. Convenience is awesome, but use your intuition to decide what’s best in the long run for you and your whole family.

Even if you choose attachment parenting it’s likely that you and your family will benefit from some mix of both convenient and wise/intuitive parenting methods.