When my copy of Mediterranean Paleo Cooking arrived yesterday I did a little dance.  When I opened it, I had to sit right down.  I found myself doing something that I have never once done with a cookbook:  Reading it from cover to cover!

The photos in Mediterranean Paleo Cooking are vibrant and beautiful.  Two of my boys were looking over my shoulder while I read and they ooh’d and aah’d right along with me.  I’ve seen a lot of cookbooks, but this is the first one I’ve wanted to read every page of without putting it down.

Mediterranean Paleo Cooking is so much more than a cookbook.  It tells a story.  Authors Caitlin Weeks, NC of Grass Fed Girl and Chef Nabil Boumrar are a husband and wife pair of Paleo dynamos.  Their story is as beautiful as the food they make.  Both Weeks and Chef Boumrar, who was born and raised in Algeria, dedicated the cookbook to Boumrar’s mother, who served them both food and inspiration.

The amazing photography displayed in this cookbook is the result of a collaboration with Diane Sanfilippo of Balanced Bites and New York Times Bestselling author of Practical Paleo.

I know, I know!  You want me to get on with talking about the recipes.  Well, they are amazing.  This cookbook has over 150 grain-free paleo recipes.  (Now, some of the recipes do contain dairy, which technically makes them Primal.) From appetizers to desserts, Mediterranean Paleo Cooking has all the recipes you need to get going on a path toward wellness with delicious, real food.

Mediterranean Paleo Cooking is more than just a book of recipes.  Weeks and Boumrar have created a Paleo cookbook that is perfect for beginners and seasoned cooks alike.  I know you’re thinking that some of the recipes I listed sound complicated.  Right?  Well, they aren’t so complicated with the clear instructions, chef’s tips and dish pairing information found with each recipe.

Weeks and Boumrar understand that even within the Paleo community there are many with further specialized dietary needs.  Autoimmune paleo recipes are for those who are following the Autoimmune Protocol that helps those with autoimmune issues avoid trigger foods and thus avoid the symptoms of autoimmune issues.

A Low FODMAP diet is for people who are sensitive to fermentable oligosaccharides, disaccharides, monosaccharides and polyols.  These foods (such as onions, garlic, apples, almonds and many others) cause digestive issues in sensitive people.

Mediterranean Paleo Cooking recipes are clearly labeled with common food-sensitivity ingredients and makes it easy to avoid problem foods.  Each recipe contains a label denoting the presence of nuts, eggs, FODMAPs and adherence to special diets like AIP, SCD/GAPS and Low Carb.

Your Paleo Kitchen is Not Complete Without This Cookbook!

I could write on and on about this lovely cookbook, but you’re probably convinced by now that it deserves inclusion in your Paleo library.  For your convenience there is both a hardback and a Kindle version of Mediterranean Paleo Cooking.

Be sure to come back and let me know what your favorite recipe is! 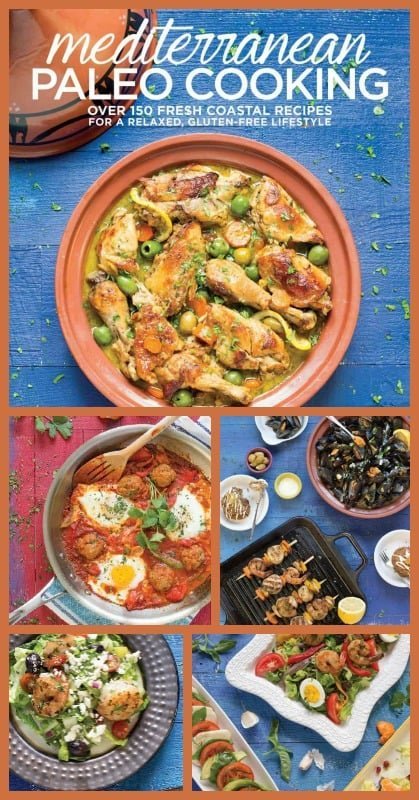