I’m two weeks in to my oil pulling experiment and it’s going well.  And by going well, I actually mean that there’s been no more gagging.  I’m pretty used to the mouth feel and the flavor has never been a problem.  I’m still using coconut oil, as well.

I use two teaspoons of oil and it’s usually hardened, so I still have to let it melt in my mouth before the swishing can begin.  I don’t like that process any more than I did on the first day, but I’ve gotten better at ignoring it and staying busy unloading the dishwasher so that I don’t think about it too much.

I’ve worked up to 15 minutes per day, but I accidentally skipped two days in a row this week.  I’ve just been so busy that I hit the ground running most days and simply forget.  I’ve made it a point to put the jar of coconut oil on the bathroom counter so that I’ll see it first thing.  I’ve found that swishing in the shower is a good use of my time.  And, of course, swishing while doing my morning chores and making breakfast is easy–as long as I remember.

Have I completed the detox?  Am I through the worst stage of oil pulling?  I don’t know.  I haven’t noticed any other health effects than the ones I mentioned last week.  My teeth, gums and mouth feel cleaner–like just-from-the-dentist clean every time I oil pull.  My teeth and gums look healthier.  Teeth are whiter, gums are pinker.  But, other than my oral health seemingly improving, I’ve not noticed changes elsewhere.

I’ll keep ya posted, though!  Check back next week for another update. 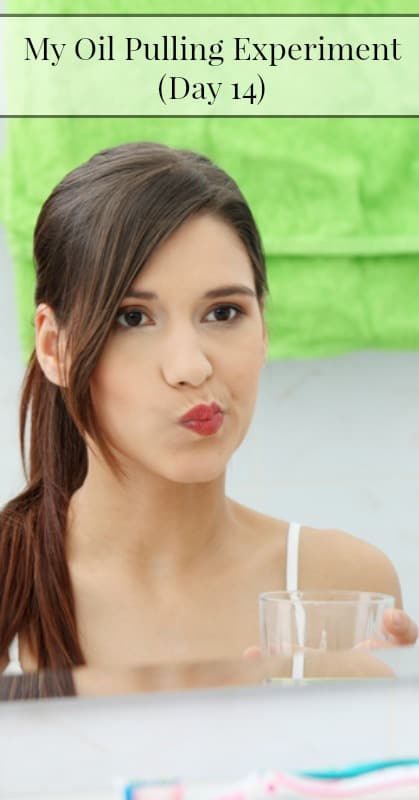