Should Your Child Play Sports?

The last post in the “Should Your Child Play Sports” series is a more emotional one.  I want to talk about how to be a good sports parent if you and your child have decided that sports are going to be a part of his or her life.

I’ve been a sports parent and coach’s wife for over 10 years now.  In that time I have witnessed and, shamefully, been a part of sideline coaching and referee berating.  It never goes well and it  has never helped my child or anyone else’s to play a better game.  It has never made a referee change his or her mind.  It has put undue pressure on a coach and his or her players, ruined games and shaken their confidence.

How to Behave on the Sidelines as a Parent

Don’t Talk to the Players

File this one under “If you don’t have something nice to say, be quiet.”  If you’re not offering positive encouragement to the players on your team (that includes your own child), then don’t talk at all.

As the players get older the stakes get higher and parents get a little more . . . erm . . . unhinged about youth sports.  Where we used to sit on the sidelines and chat about the weather when our children were six, we now are fully focused on the game and on our child’s performance.

I’ve seen some truly horrible parenting on the sidelines of a soccer field.  These sorts of parents have no problem berating their children in various ways.  Some are sly and communicate their displeasure with narrowed eyes and the silent treatment.  Others are more obvious and announce their disappointment over the performance of their off-spring in a way that not only humiliates their child, but makes all of the other parents and children uncomfortable, as well.

I’ve witnessed parents talking to players on the other team and even name-calling children who appear to be aggressive — even when the aggressiveness is entirely within the rules.

Remember that your child is not playing for you.  Your child’s performance in athletics is not a reflection on you.  Don’t use negative feedback and punishment to get better athletic results from your child.  It won’t work.  It will cause your child to burn out and hate sports.

If you can’t offer constructive, positive encouragement and time outside of practice to help your child improve (if they desire it!), then it would better to skip their games, or at least sit far enough away that they can’t hear you.

I’ve found that staying away from the other parents on the sideline when I’m feeling intense about a tough game or about my child’s performance helps me to stay in better control of my emotions during a game.

Don’t Talk to the Referee

Referees have a terrible job.  I certainly wouldn’t want it.  Dealing with frustrated players, angry coaches and emotional parents is tough, but – literally, folks – someone has to do it. Be grateful that the refs are there!

When I’m not on the sidelines of my childrens’ games, I can’t think of a single reason that it’s okay to talk to the referee.  However, when game time rolls around I find myself thinking of all sorts of things I’d like to tell the ref.  And more often than I’m proud of, those things slip right out of my mouth.  I have to practice keeping my mouth shut at every single game – and I’ve gotten better, thank goodness.

What can you do about it?  Nothing.  That’s right.  No amount of whining from the sideline is going to make the situation better.

So, what can you do to help your child play well despite the kind of game the referee is having?  Teach them to move on.  As you know by now, life isn’t fair.  Sometimes we get blamed for things that aren’t our fault.  Sometimes people misunderstand us. Sometimes our boss seems to favor a co-worker.

When your child is saddled with a ref who appears to be terrible, your child is getting experience in how to keep his head up and soldier on, even in adversity.  Don’t make that lesson harder by losing your mind on the sideline.

And another tip . . . make sure you understand the rules of the game before you criticize the referee. Just a thought . . .

Don’t Talk to the Coach

While I don’t see many parents openly criticizing the coach during a game, I do see parents who try to talk to the coach about his or her decisions immediately after the game.  That’s not okay.

A good rule of thumb is to give yourself and the coach at least 24 hours to cool off and process the events of the game before having a conversation that consists of anything more than, ‘Good game, Coach’ or “Tough game, Coach”.

Don’t Talk to the Other Team’s Parents

I don’t see it happen often that the parents of each team exchange negative words.  When it has happened, though, it has been very ugly.  Parents go straight for the jugular, putting down the other team’s players within earshot of the other team’s parents.

This is never okay.  If you can’t have a nice conversation with the other team’s parents, then don’t talk to them at all.

You Help to Shape Your Child’s Game Experiences

If you haven’t noticed a common theme through all of the tips above, here it is:  Sit quietly on the sidelines at your children’s games, speaking only to offer positive encouragement to the players and the other parents.

Anything more than that will diminish your child’s experience as a player.  As a coach, my husband’s toughest obstacle was dealing with parents.  For more than one team he’s coached, he’s had to strategically place players on the field so that they wouldn’t be too close their parents.  In the older ages he’s coached, the players have sometimes requested this so that their parents wouldn’t talk to them throughout the game.

Don’t be that parent.  Ask your child if he or she is bothered by the sound of your voice or the words you say during the game.  If your child says yes, then stop talking to them while the game is in progress. 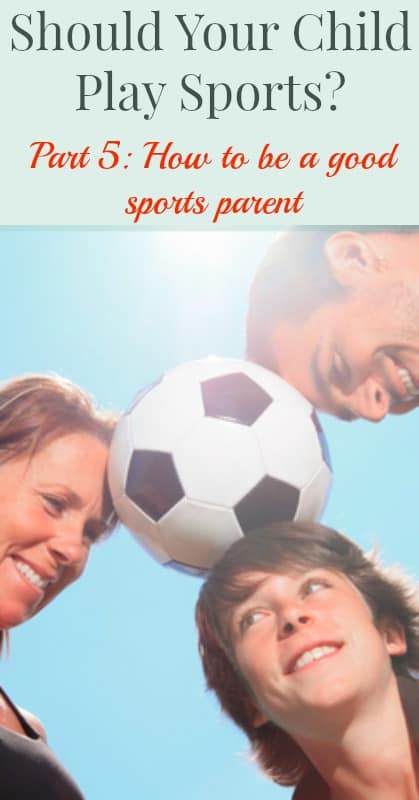