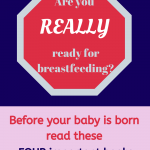 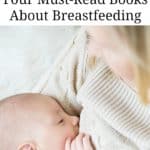 My go-to baby shower gift when the mom-to-be plans to breastfeed is a book about breastfeeding. Without certain important breastfeeding books my breastfeeding experience would’ve been over before it had a chance to start.

My Views on Breastfeeding Were Naive

I was 19 years old before I realized that infant formula wasn’t prescription-only.  I assumed the milk I saw in baby bottles was either pumped breast milk or cow’s milk.  In fact, I thought formula was only for infants who were allergic to the breast milk of their mothers.

After all, I was one of those infant who had been “allergic” to my mother’s milk.  I was breastfed for six weeks before my mother began to use formula because I “spit up all the time”.

Now I understand that I likely had reflux. In reality, many infants spit up a lot regardless of their food source.

I assumed every mother fed her newborn by breastfeeding – after all, that’s what they’re for – and that formula was a special concoction that a doctor and pharmacist worked together to provide for mothers whose babies had a breast milk allergy.

It was only when I saw an ad for formula at the age of 19 that I realized it could be bought over-the-counter.  I made a note of that and of another PSA telling me that “breast is best” and filed it away for later recall.

Almost four years later I became pregnant with my first child. Within months I embarked on the most amazing, yet difficult journey.

I Wasn’t At All Prepared For Breastfeeding

I went through my entire first pregnancy without giving a single thought to breastfeeding.  A couple of friends asked if I was going to breastfeed and I said, “Of course!”.  To me, there wasn’t another option.  In my mind, formula was for sick babies who couldn’t nurse.  I really had no clue.

Unfortunately, I didn’t read any books about breastfeeding or talk to any moms who had breastfed. I truly believed that when my baby was born, he would latch effortlessly and we’d nursed for about six months. After that he’d eat jarred baby foods. I also thought that weaning would be easy.

Closer to delivery, I read in a magazine that breast milk or formula for the first year was essential and so I decided that after weaning my son at six months, I would use formula.  I still assumed he’d be eating enough baby food that he would have no more than 1-2 bottles of formula per day.

I made the decision to breastfeed my son without much thought or research.

When my son was born, I was in for a rude awakening.  Fortunately, I found helpful books and breastfeeding support groups that would help us to succeed at breastfeeding. These valuable resources changed my views about breastfeeding and other parenting topics, as well.

What Would I Do Differently?

If I could go back to my first pregnancy and do one thing differently it would be to read tons of books about breastfeeding. I’d also join online and in-person support groups before my baby was born.

As I learned to breastfeed my son, I found it helpful to hear other moms’ breastfeeding stories. If I’d seen them work out their struggles before my son was born I would’ve been better prepared for my own struggles.

Breastfeeding books aren’t a perfect substitute for having a female relative to teach you about breastfeeding, but they’re the next best thing.

Read about my newborn breastfeeding issues in the next part of this series.