I admit it.  I despise multitasking.  It leaves me annoyed and unsatisfied, just as any jack-of-all-trades should feel.  Every job interview I’ve ever been to has had me stifling an eye-roll and a pouty, “I can, but I don’t wanna.” when the overused term “multitasking” has pushed its way in and hung around like a stalker.  Most job descriptions I read contain phrases such as “must have the ability to multitask” and “fast-paced environment”.  I understand that the way society and technology have evolved has created a need for people who can multitask.  I simply disagree that the way things are is healthy and productive.

According to an article on the American Psychological Association website:

Although switch costs may be relatively small, sometimes just a few tenths of a second per switch, they can add
up to large amounts when people switch repeatedly back and forth between tasks. Thus, multitasking may seem
efficient on the surface but may actually take more time in the end and involve more error. Meyer has said that
even brief mental blocks created by shifting between tasks can cost as much as 40 percent of someone’s
productive  time.

When I worked as an executive administrative assistant nearly 10 years ago, I wore many hats. Multitasking was my game and, although it exhausted me (and my pregnancy-clouded brain), I did what was expected of me. (Turns out that the multitasking prepared me well for motherhood!) Not long into the job I was given another “side task” of billing analysis and preparation. I loved doing the billing for our clients, but it was tedious work. It required attention to detail, communication with all departments and persistence in receiving important information in a timely manner. After seemingly near-constant interruptions one day during the intense end-of-the-month finalization of the billing, I timed how often I was actually being interrupted. It was between 2-13 minutes all day long. I would handle another aspect of my job, become refocused on the data in my spreadsheets and be yanked away again to perform some other task.  It was maddening and tiring.  I often considered asking my boss for one day each month during end-of-the-month to lock myself away and focus on the billing with no interruptions.  It would have probably taken me 4-6 hours to complete the billing that way.  Instead, I was given a period of 3-4 days in which to complete the billing reconciliation because of multitasking.  In other words, it took longer than it should (definitely more than 4-6 hours over 3-4 days) because I was constantly interrupted.  I probably could have added another task to my job description if only I had been able to focus on one task at a time!

Now, if you know anything about personality you are probably saying, “Spoken like a true introvert!”  Yes, I fully admit and adore my introversion.  Certainly personalities are more biologically prepared for multitasking than others.  There is a chance that you are reading this and thinking, “Oh, I love to multitask!”  You are probably an extravert and that’s okay.  I love you anyway.  I’m only asking, can you imagine a world where Albert Einstein was forced to multitask?  What about Bill Gates?  What if those brilliant minds had been forced out of their deep thoughts and silent spaces and made to answer a phone or respond to an email or have a “working lunch” with co-workers while they were in the middle of discovering and creating brilliance?  Exactly.
While I don’t disagree that it’s socially appropriate to be well-rounded, I do think that we can all benefit from narrowing our focus and getting really good at or completing a task before moving on to something else.  I’d rather be master-of-one than master-of-none.  There is a good chance that most of us can be master-of-several if we simply slow down and focus.
Even if you enjoy a fast-paced work or social environment, it is good to take some time to practice mindfulness.  Living outwardly has it’s place, but taking time for inward focus can bring an awareness of things you may have missed while hippity-hopping from task to task.
What should you do if you are in a multitasking environment from which you desperately need a break?  Here are some tips:
1.  If you are overwhelmed by multitasking at work, talk to your boss.  I wish I had had the understanding 10 years ago that I have now.  I would have presented my findings to my boss and explained how the company could benefit from me putting other work aside one day per month and focusing on one task.
2.  Set times each day for checking email.  Once in the morning, again after lunch and a half-hour before leaving work should be enough.  This will allow you catch important emails in time to respond before the business day ends.  You can set an auto-reply letting others know that you will check your email at 9:15, 1:15 and 4:15 every day.  That prevents others from watching their inbox in expectation of a reply from you and wasting their time.  If the situation is urgent, they can leave you a voice mail and you can decide if it warrants an immediate reply based on agree-upon criteria.
3.  Don’t be afraid to say that you don’t enjoy multitasking.  Instead, explain to others that you are committed to doing each task well.  Multitasking causes us to overlook details and not think things through enough.  Doing things right the first time saves time and money.
4.  Consider changing to a slower-paced job.  If multitasking is causing you to feel anxiety or consistently make mistakes, you might simply not be cut out for it.  And that is okay.  Don’t criticize yourself because you don’t fit the multitasking mold.  Your purpose in life probably requires deeper focus and deliberation.  It takes all kinds of people . . . 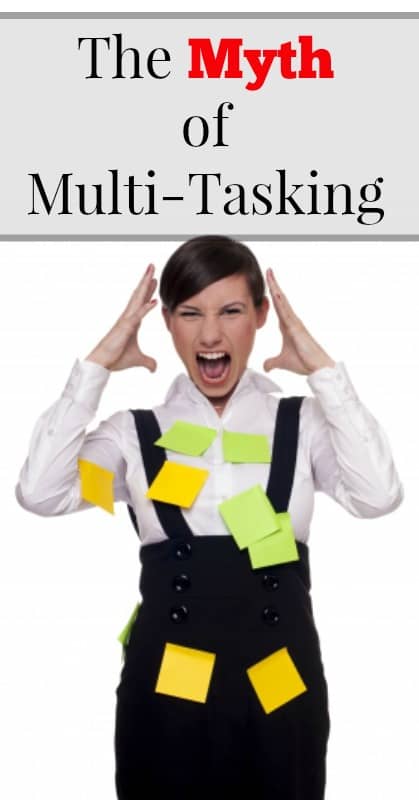