How to Watch TV Without Cable (Yes, Even ESPN)

How to Watch TV Without Cable (Yes, Even ESPN)

How much is your cable bill each month? Do you really watch $50-200 worth of TV? If you’re ready to cut the cord on cable and get rid of the unnecessary expense, like my family did, read on to find out how to watch TV without cable.

You’ll Survive Without TV, But You Don’t Have To Take it That Far

I grew up without a TV in my home. One night in the 70s, before I was born, lightning struck my family’s TV set and my mother declared it a good thing. My parents didn’t replace the TV set and so I missed a good chunk of 80s pop culture – with the exception of what I was able to watch at friends’ houses.

In the early 90s, My dad eventually got a small TV with an antenna for his workshop. I have fond memories of watching Diagnosis Murder, Dr. Quinn Medicine Woman, Murder She Wrote and the Cosby Show with my dad. However, TV just wasn’t a huge part of my life and I think I used my imagination more, read more, thought more for myself and became more creative than my friends who watched a lot of TV.

Why Pay For What You Don’t Watch?

When I left for college, my dear aunt gave me a small television set to take along for my dorm room. That’s when I fell in love with TV. I chose my first apartment based on the fact that they offered basic cable as part of the rent. By the time I had children, my husband and I subscribed to an expensive premium cable package with all of the bells and whistles.

It didn’t matter at first that the only channels watched in our home were network channels, ESPN, Disney, Nickelodeon, Food Network and HGTV. As a busy mom, I didn’t have to time to watch TV anymore and my husband was at work all day and coached soccer in the evenings. My boys enjoyed TV as much as any other kids, but they watched the same three shows on the same two channels.

We were paying for a ton of TV channels that we didn’t watch.

Of course, we dropped the premium channels pretty quickly, but that didn’t actually lower our cable bill much. When all was said and done we were paying close to $200 a month for cable. That included our cable modem, which was about $20 less than normal because we bundled it. Without the bundle, we’d be paying more for internet.

Finally, we had enough of overpaying for channels that we never watched.

My husband and oldest son are big sports fans, though, so giving up ESPN was going to be a tough sell. My younger two enjoyed Disney and Nick enough that they would miss their favorite shows if we got rid of cable. It was a dilemma, but we knew that everyone would be okay and we could spend more money on family fun without that hefty cable bill to pay.

How To Watch TV Without Cable – Yes, even ESPN, Disney and more.

In a really awesome turn of events, we discovered a great way to watch our favorite channels not long after cutting the cable cord. At this point, I don’t know why anyone would subscribe to cable if they have access to the internet in their home. It’s so easy (and frugal) to watch tv without cable thanks to newer technology.

I have been watching my favorite network shows online for years. I simply go to the network website or use the network app and I can watch my favorite shows about a day after they air. Since I’m not available to watch TV during primetime hours and only get a few minutes here and there to watch on my computer or phone, I don’t mind getting my shows a day later.

We also installed a digital antenna on our TV for when we do want to watch network shows as they happen. We actually get even more network channels than we got with cable!

We use Hulu, Netflix and Amazon Prime Video for network TV shows (both network and cable channels), original series and movies. The cost for each is super low.

We have a Smart TV that connects to the internet so that we can watch Netflix, Hulu, Amazon and more right from our TV. Each of the boys have Xbox Live, which allows them to do the same from their TVs.

To get live ESPN, Disney, Nickelodeon, Food Network, HGTV, A&E and so many more, we use Sling. Now, Sling costs around $20 per month, so it’s not as frugal as Netflix or Hulu, but we don’t mind paying $20 for channels that we actually watch. The best part is that we can watch Sling on our mobile devices, so watching TV on long car rides is possible now.

Now, Sling costs around $20 per month, so it’s not as frugal as Netflix or Hulu, but we don’t mind paying $20 for channels that we actually watch. The best part is that we can watch Sling on our mobile devices, so watching TV on long car rides is possible now.

So, yes, you can get rid of cable and still get all of your favorite channels and shows for just a fraction of the cost. You can create or delete your accounts with Netflix, Hulu or Sling with ease – no more waiting for hookup or having to return a cable box when you close the account. You can turn them off for a month or two if you’ll be busy and not have time to watch and then turn them right back on when you’re ready to watch again.

Now that Amazon Prime and Hulu offer premium channels like Showtime and HBO has HBO GO, there is really no reason to put up with cable anymore. Everyone – even the biggest TV lovers – can watch tv without cable.

Be free, my friends! 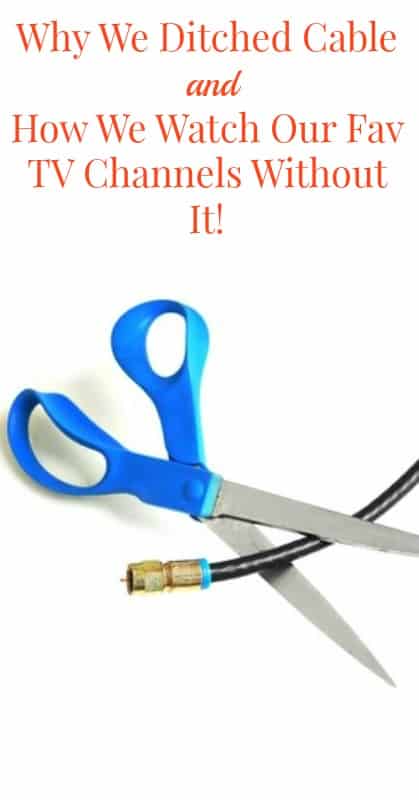